A brief history of the University of Edinburgh Forrest Hill building

Comments and corrections on this brief history are welcome. 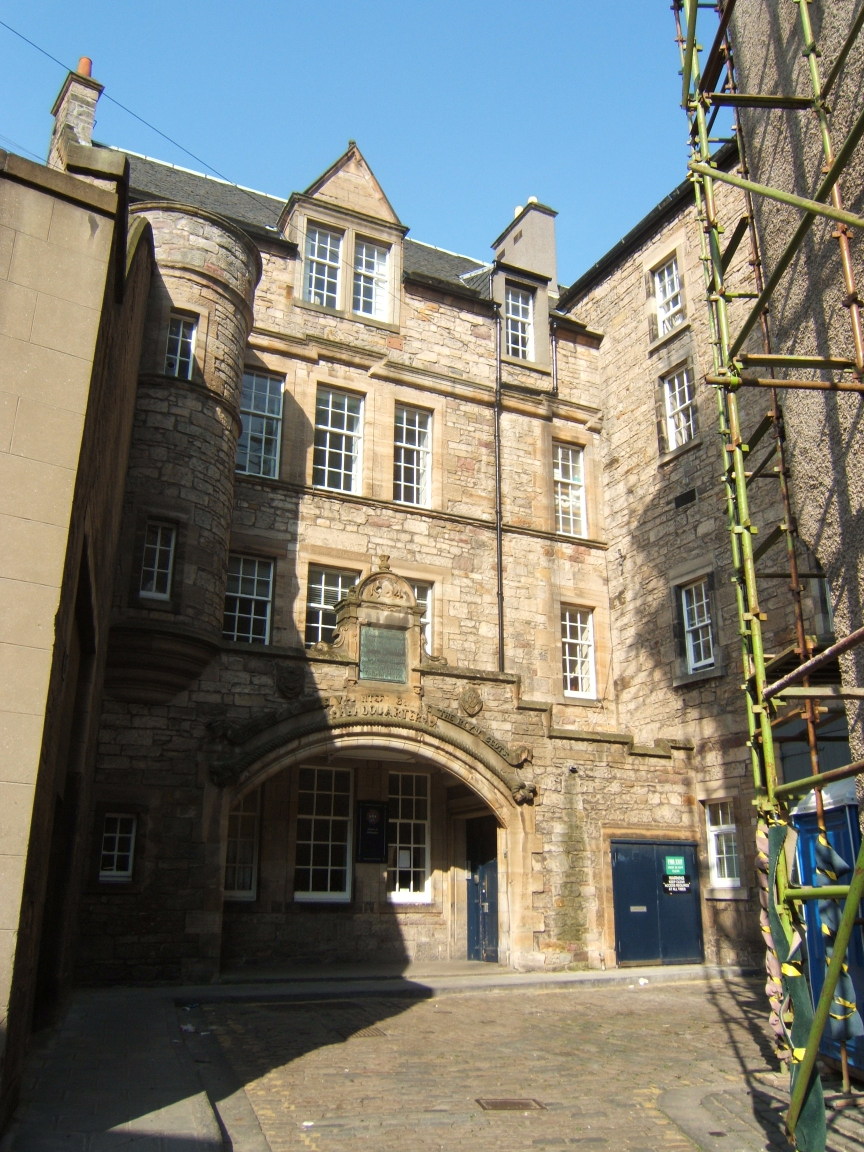 The building at 5 Forrest Hill, until 2008 occupied by the University of Edinburgh School of Informatics, comprises three historically distinct portions:

The Charity Workhouse has its origins around 1740, when, according to Arthur Birnie in his book The Edinburgh Charity Workhouse, 1740-1845, the Town Council and the kirk-sessions agreed to construct a Charity Workhouse where, to stamp out a plague of beggars, “the city poor could be housed and set to work”. According to Peter Higginbotham on workhouses.org.uk:

The Edinburgh Charity Poorhouse in Port Bristo was built in 1739-1743 by Samuel Neilson, mason, and William McVey and James Heriot, wrights. It was financed by voluntary subscriptions. Funds for its operation were raised by a variety of means such as a tax on the valued rents of the city, collections at church doors, charitable donations and other contributions including an annual benefit play at one of the city’s theatres. It was a substantial establishment that, in 1777-8, could accommodate 484 adults and 180 children.

The OS map of 1852 (available from workhouses.org.uk or the National Library of Scotland) shows the West wing of the Edinburgh Poor House to be located where the north-most part of the current building (right) stands. 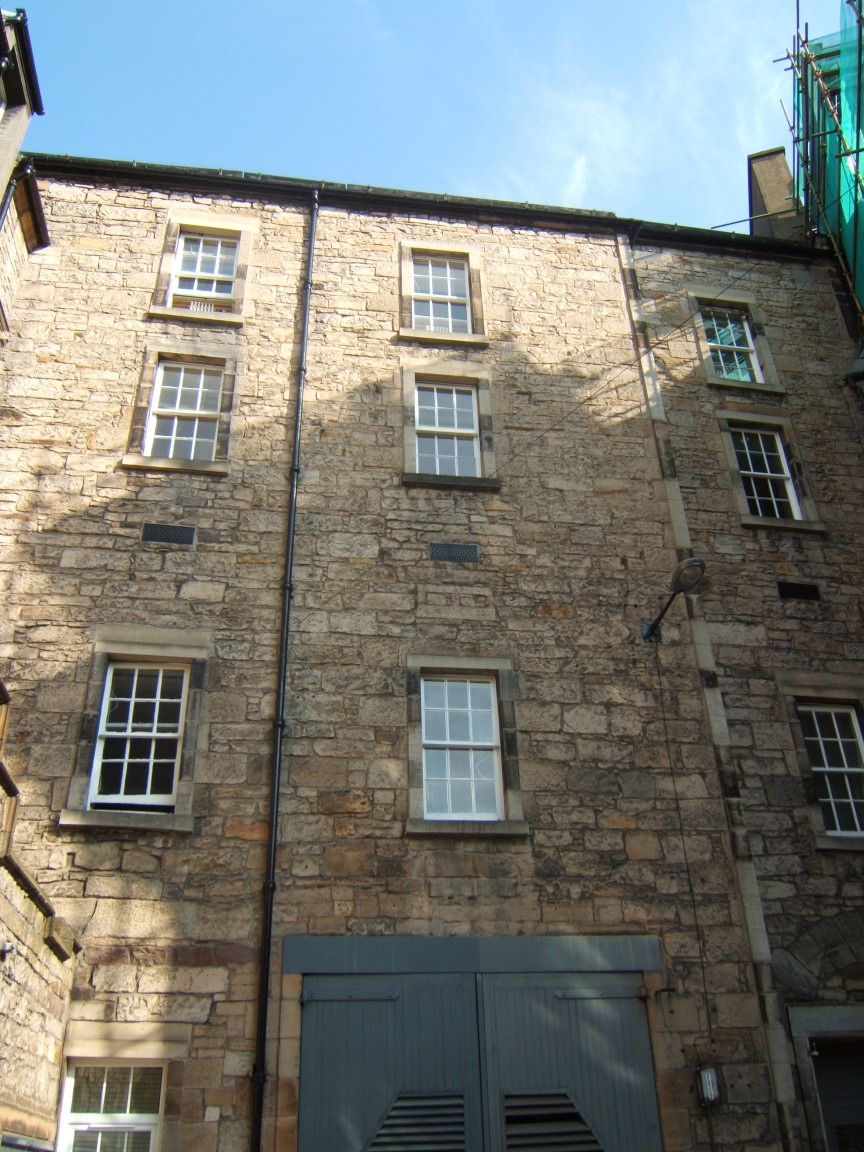 West wing of Edinburgh Poor House. The OS map from 1852 describes this as “The West Wing, for Women and Children” of the Edinburgh Poorhouse. It does not appear in Kirkwood’s plan of 1817.

The wing is marked as being for women and children. The wing does not appear in Kirkwood’s 1817 plan of Edinburgh. Birnie does not mention the building of this wing, though he does mention the problems that the managers of the Charity Workhouse had in the mid-nineteenth century accommodating children.

Part of the original Poor House building, constructed in 1743, still exists. It is the building shown in the first picture at the right (covered in scaffolding), that protrudes into Forrest Hill. Most of the building was demolished to make way for the Drill Hall in 1871, but one end of the “Main Wing” (as it is denoted on the 1852 OS map) remains. 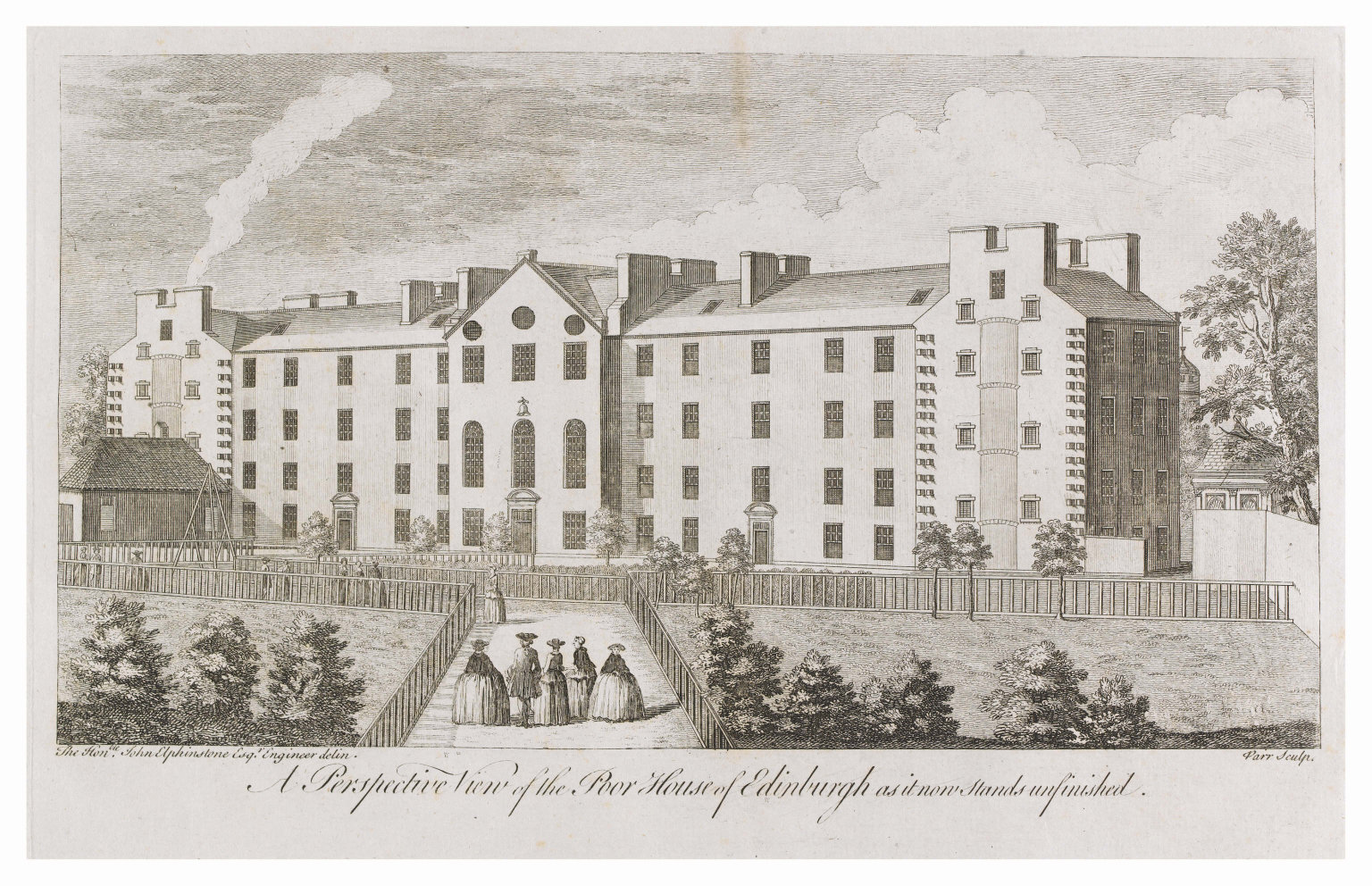 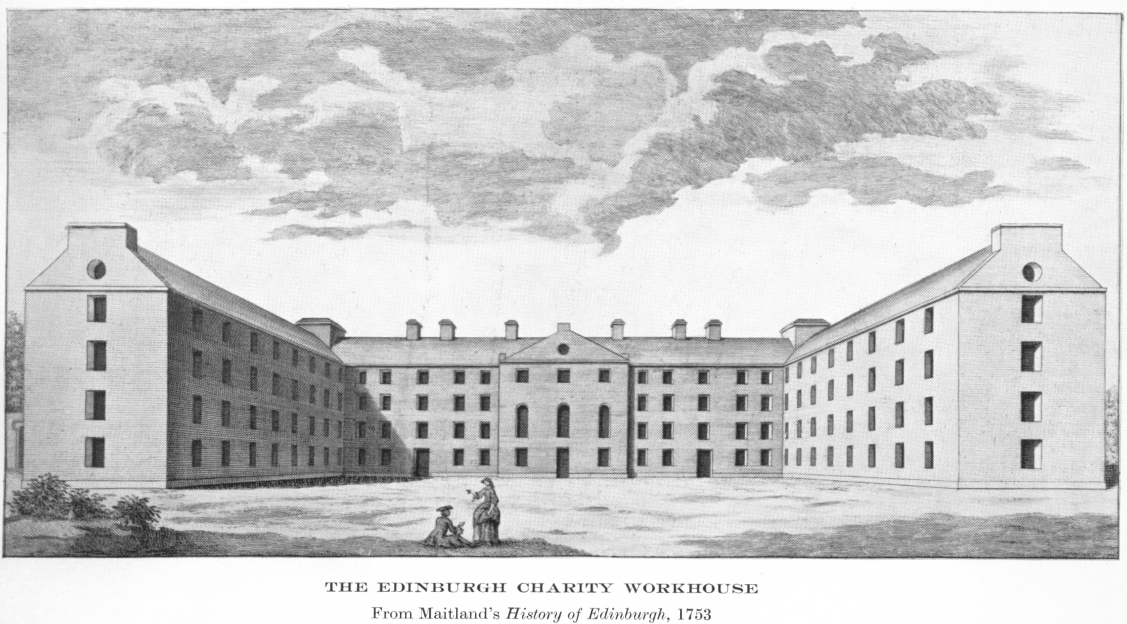 Maitland’s engraving of the charity workhouse

There is also some information on the Charity Workhouse in Cassell’s Old and New Edinburgh by James Grant.

From this history of the City Hospital in the Lothian Health Service Archive:

In 1867 the Public Health (Scotland) Act gave power to local authorities to make provision for the treatment of infectious diseases during periods of epidemics …. as the Managers of the Royal Infirmary refused to admit cases of smallpox or cholera, premises in King’s Stables Road and in part of the poorhouse in Forrest Road were fitted up as temporary hospitals to meet any emergency that might arise.

After the Royal Infirmary moved to Lauriston Place in 1879 its Managers used Old Surgeons’ Hall for the treatment of infectious fevers during ordinary seasons. 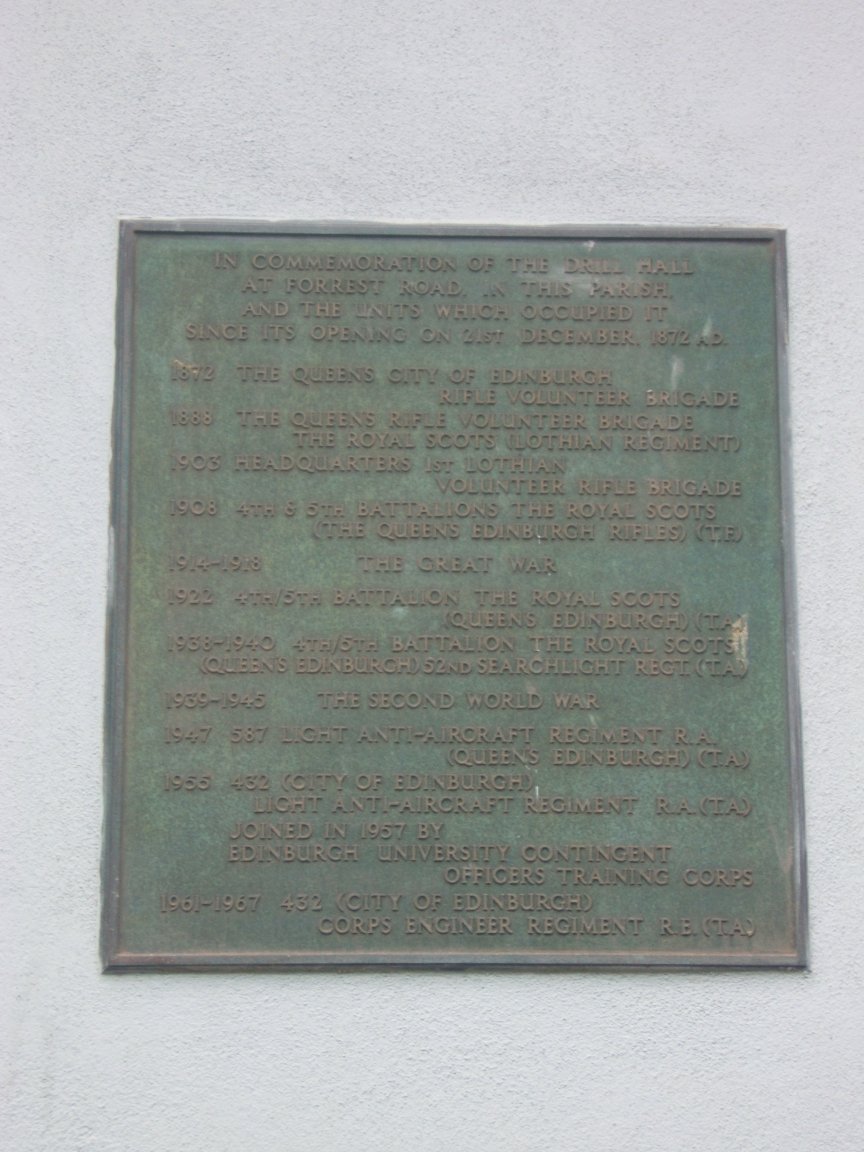 Plaque on side of Greyfriars Kirk, which reads: Regiment raised 1859. Headquarters rebuilt and opened 6th May 1905 by HRH the Duke of Connaught KT. Colonel Sir Robert Cranston VD. Colonel Comandant of Brigade. Lord Provost of the City.

According to the Dictionary of Scottish Architects the Drill Hall was constructed in 1872, designed by the practice of Stewart and Menzies, who had been involved in a faulty water supply scheme for Dundee. According to the plaque on the side of Greyfriars Kirk, the Drill Hall was opened on 21st December 1872 and was occupied at first by the Queen’s City of Edinburgh Volunteer Rifle Brigade, and then a succession of battalions and regiments, being joined by the University of Edinburgh Officer Training Corps in 1957. 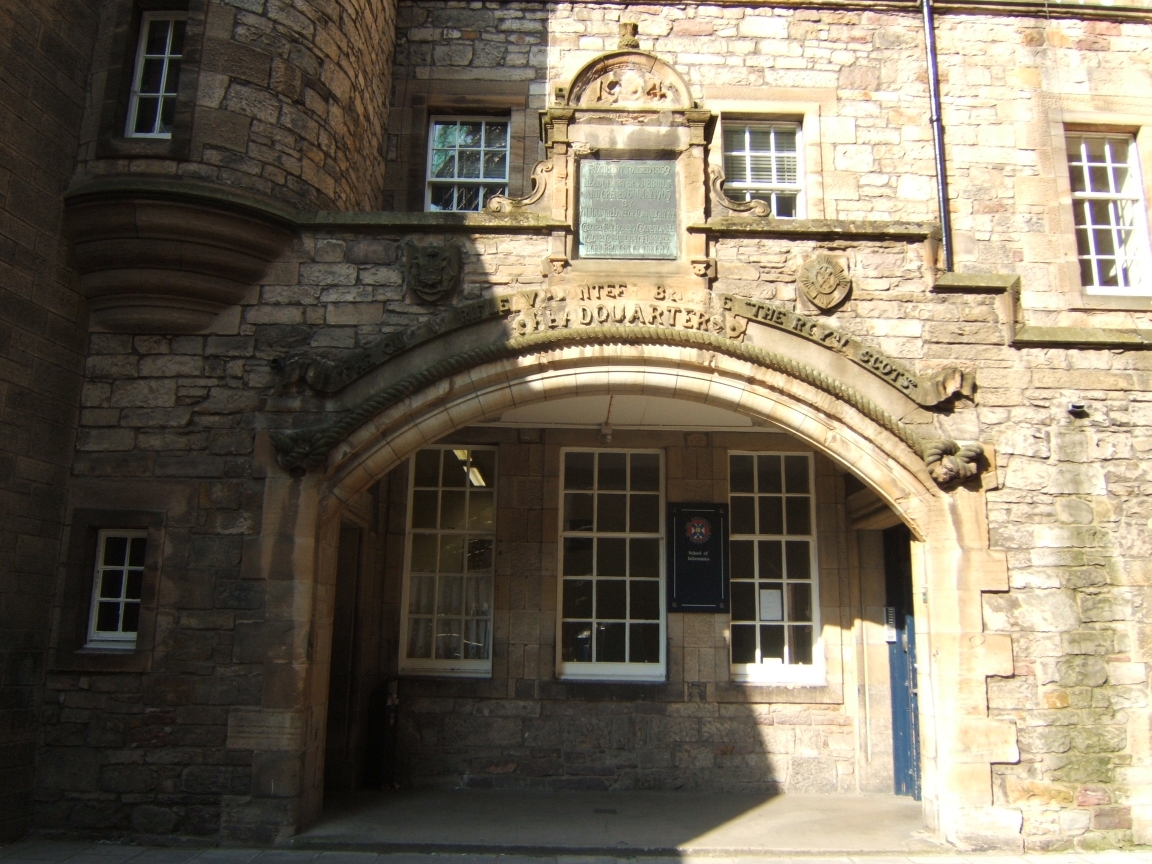 The entrance, with carved inscription, which reads: “The Queens Rifle Volunteer Brigade The Royal Scots. Headquarters.”

According to the Dictionary of Scottish Architects, an extension to the 1872 Drill Hall and HQ for the Queen’s Rifle Volunteer Brigade, The Royal Scots was constructed between 1902 and 1904, and is now B-listed. This is the centre part of the building, which contains the entrance with the carved inscription and the plaque. However, in the 1894 OS map the centre part of the building already appears to exist, though it is not in the 1877 OS plan. Building News of 2 September 1904 reported:

EDINBURGH. - Progress is being made with the erection of the new headquarters in Forrest-road, for the Queen’s Rifle Volunteer Brigade (Royal Scots). In view of the building being much inclosed, and also with the object of keeping down expenses, no attempt has been made at an elaborately decorated exterior. The general design is a simple form of the Scottish Baronial style, and the walls are rubble covered with harl. The aspect to Lauriston has two crow-stepped gables, the larger of which contains the lecture hall and has circular corbelled turrets at the corners. The main entrance is situated under a projecting porch, and on the left leads immediately to the drill-hall and the orderly-room, and on the right to the main staircase. In communication with the orderly-room is the adjutant’s room. That again leads to the commanding officers’ room, in direct communication with the present drill-hall. To the rear is a store for six machine guns, a store for camp supplies, and the armoury, which has accommodation for 3,000 rifles. To the right of the main entrance is the store for the baggage waggons, and part of the north wing will be devoted to storage. Officers’ quarters are on the first floor, and a circular staircase leads up to the lecture-hall floor. On the same floor is a suite of four company meeting rooms, the largest 20 feet by 39 feet, and the smallest 15ft. by 18 feet. The medical officer’s room is also on this flat, and the gymnasium, which will measure 46 feet long by 25 feet. broad, with an 18 feet roof. Adjoining will be a lavatory, with two shower-baths, and in the entresol a dressing room. On the second floor will be the sergeants’ mess and a billiard-room, with a service-room connecting the two. The north-west block of this flat will be used a recreation place for the men, a room 26ft. by 25ft. On the third floor will be the lecture-hall. The architects are Messrs Cooper and Taylor, 20, Frederick-street, Edinburgh.(p 323, cited from the Dictionary of Scottish Architects) 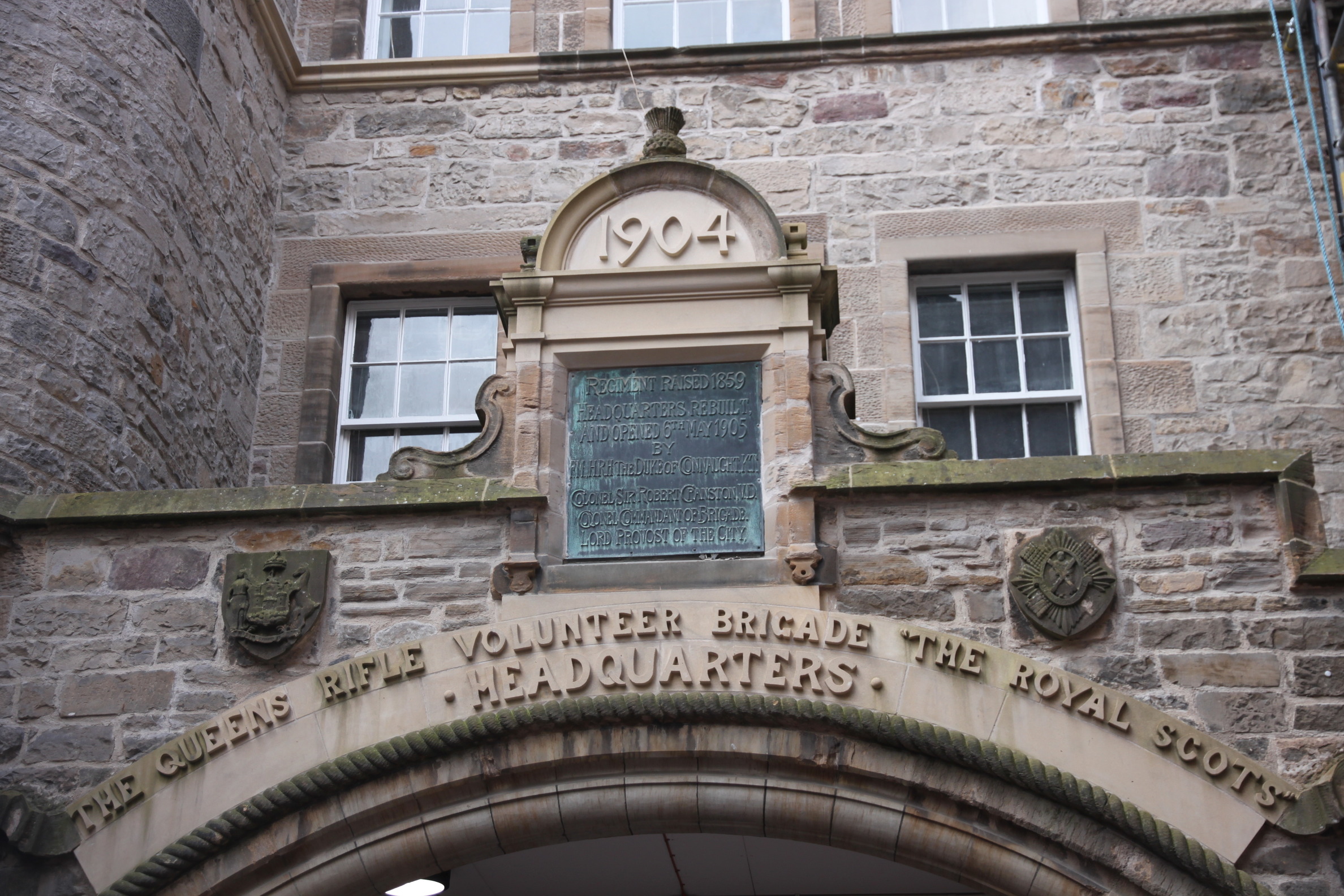 By 2015 the inscription above the door had been restored. Photo courtesy of George Ross.

In 1969, the University of Edinburgh took over part of the building from the Army. Until circa 1990, the Army and the University shared the building. The Drill Hall was used as a garage for army and university vehicles. Until June 2008, the Department of Artificial Intelligence (and forerunners) and then the School of Informatics or its forerunners occupied the building. According to Jim Howe, head of the Department of Artificial intelligence from 1977 to 1996, notable work carried out in the building included the construction of “the FREDDY II robot which was capable of assembling objects automatically from a heap of parts”. FREDDY can now be seen in the National Museum of Scotland in Chambers Street, and the inside of one of the ground floor rooms can be seen in the video of FREDDY at work.

Over the summer of 2009, Communications and Marketing section took up residence in the part of the building, with the remaining space being used for teaching.

In 2015, to allow for recladding of the Appleton Tower, Informatics teaching labs and administration was decanted into the building. The building underwent significant alterations, including installing a lift in the light well.  A mezzanine floor has been built since 2009 in the Drill Hall, and this is now occupied by a large teaching lab.

There’s a scene in the film The Pride of Miss Jean Brodie (Maggie Smith et al.) where the girls and Jean are in Greyfriars churchyard and the back wall of Forrest Hill and a few windows are visible. Then the camera pans round and - pouf - we’re in a completely different place.

The former Drill Hall has been used as a Fringe venue (number 109) on a number of occasions: